Christmas Eve and Other Stories Story

Christmas Eve and Other Stories

Part 1 of the Christmas Trilogy

On a snow blessed Christmas Eve a young man found himself alone in the back of an old city bar in the run down section of town. Using his solitary drink as something of a moat between himself and the rest of the world, he was surprised when an elderly gentleman asked to join him at his table. Reluctantly, he nodded his permission but within minutes he found himself engrossed in a story that the old man related to him; a story about another Christmas Eve when the Lord looked down from above at all his children. It had been nearly two thousand years since the birth of His son and turning to His youngest Angel the Lord said, “Go down to the Earth and bring back to me the one thing that best represents everything good that has been done in the name of this day.”

The Angel bowed to the Lord and spreading his wings, descended from heaven to the world of man, all the while contemplating his mission. So much had been done in the name of honoring the birth of the Christ Child. For this day wars had temporarily ceased, cathedrals had been built and great novels had been written. With so little time, what could he possibly find to represent all this?

As he soared above the Earth, he suddenly heard the sound of church bells below. Their tone was so beautiful that it reminded him of the voice of God.

Looking down, he saw a small church whose bells were ringing out the carol, Silent Night. As the final note died away, it was replaced by one lone voice singing inside the church. It was shortly joined by a second voice that embraced the first in perfect harmony, and then another and another until a choir of voices rose through the night. Enchanted by the magic of what he was hearing, the Angel found himself listening until the song was finished. As he resumed his flight through the night, he was delighted to hear these sounds everywhere, from the largest cities to the smallest villages. He heard melodies from massive orchestras and in the voices of single soldiers alone at their posts. And any place where he heard these songs, he found hope in the hearts of men. Grasping a song out of the air, he held it in his hand (angels are able to do this) and thought that maybe, these songs could be the one thing that best represented Christmas. They seemed to give voice to man's greatest joys as well as hope to those deepest in despair. 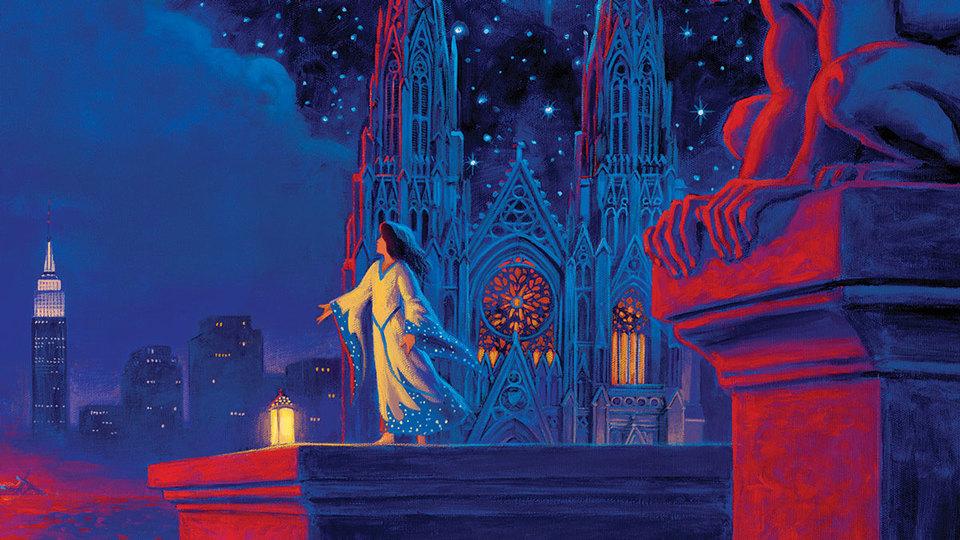 But, though at first glance it appeared to be the answer he sought, his heart told him that this music was not enough. There had to be something more. So he continued his flight through the night until he suddenly felt the touch of a father's prayer on its way to heaven. Once again looking downward, he saw a man who was praying for his child; a child whom he had not heard from in a long time and who would not be home that Christmas. Seizing upon the prayer, the Angel followed it until it reached the lost child.

She was standing on a corner, in a quiet snowfall, looking very small in a very large city. Across from her was an old city bar, the kind that only the lost seemed to know how to find.

The patrons of this establishment rarely looked up from their drinks and so seemed not to notice the young girl. Now, the bartender in this bar had been working in there longer than anyone could remember. He believed in nothing except his bar and his cash register. He had never married, never took a vacation and as a matter of fact, had never been seen out from behind his counter by most of his patrons. He was there when they arrived and he was still there when they left. He gave no credit and for seventy-five cents, served shots of un-watered whiskey to people who used their drinks like a moat around their lives. For them, he provided a safe, unchanging world. Suddenly, the door opened wide and into this world walked a small child. The bartender could not remember the last time that a child had been in this place, but before he could ask the child what he was doing there, the child asked him if he knew that there was a girl outside their door who could not get home. Glancing out the window, he saw the girl standing across the street. Turning back to the child, the bartender asked him how he knew this. The child replied: "On this night of all nights, if one could be home, they'd be already there.” The bartender looked back toward the young girl as he reflected on what the child had said. After several seconds of thought, he slowly went over to the cash register and removing most of the money, came out from behind the bar and followed the child across the street.

Everyone in the bar watched as he spoke with the girl. After a few moments, he called over a cab, put the girl inside and told the driver, "J.F.K. Airport." As the cab pulled away, he looked around for the child, but the child was gone. And what was stranger still, even though his own tracks leading from the bar were still clearly marked in the snow, the child's were nowhere to be found. Returning back inside, he asked if anyone had seen where the child had gone, but like himself, no one had, for they also had been watching the departing cab. And then, some would later say that the most miraculous thing of all happened, when for the rest of the night, no one

paid for a drink. Later that night the Angel returned back to heaven and placed in the Lord's hand, the wish of a soul for the happiness of another. And as the heavenly host looked on, the Lord smiled.

At the end of his story the old man then told the youth that he had enjoyed their time together but that it was time for him to leave. After the old man had left,

the youth found himself rushing out the door only seconds behind the elderly gentleman's exit so that he might ask his name, but not only was there no one in sight but there wasn't even a single track in the snow. The young man stood there for a moment perplexed but then he suddenly felt a sense of gentle peace and contentment flow through his body. Buttoning his coat the youth slowly walked home where for the first time since his childhood he dreamed a Christmas dream. 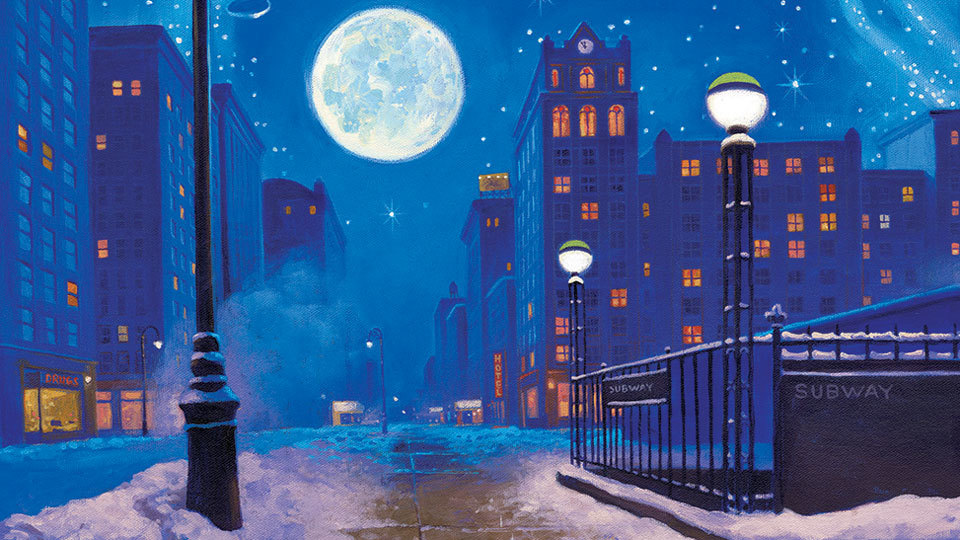